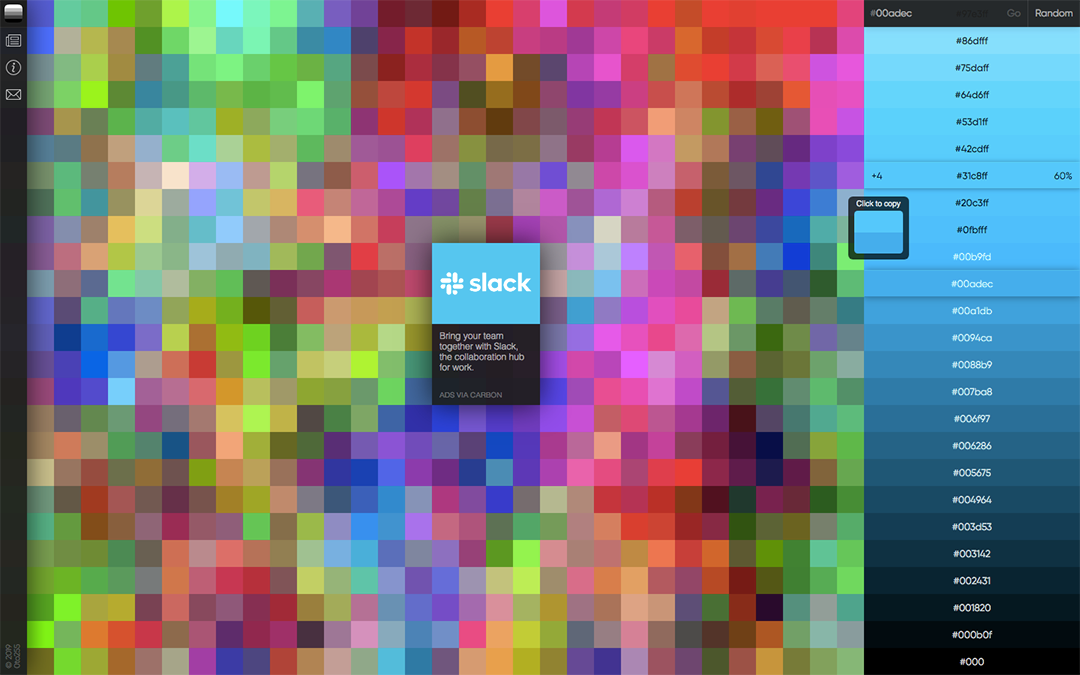 Would you look at that! And you may have thought a few times there that 0to255 had seen its last days. If you’ve ever doubted the longevity of 0to255, I won’t hold that against you. After all, I launched it in 2010 and until today it’s been more or less the same as when it launched. But I’m happy to tell you that 0to255 is just getting started. If you could see my Google Analytics account, you’d know that traffic has consistently increased in the past few years. I’m not the kind of person to neglect something that’s growing. It’s clear to me that people need an intuitive color tool now more than ever.

When I made 0to255, I wanted a tool that made it super easy to find variations of colors. Paste a color, click a color, done. The original design has worked well for 9 years. However, a lot of things have happened in that time. In 2010, most people were still carrying around phones that didn’t do much more than make phone calls. Since then, smart phones have become ubiquitous. The original design just didn’t work on phones. While that wasn’t a huge issue because most people do their design and development work on their computers, sometimes inspiration strikes on-the-go. People told me they wanted to use it on their phones. Now you can.

The most exciting reason for the update, however, is that year-after-year I thought about how to make 0to255 even more useful. I have a lot planned for this little color tool, and it doesn’t stop with color, but it does start with it. My goal is to design intuitive tools that save you time and make it easier for you to get great results. If you love 0to255 now, I know you’re going to love what I have in store so much more. I can’t wait for you to get your hands on it! It’s going to take me some time to realize everything I have in mind. I hope you stick around and get involved because there’s a fun road ahead! The launch of 0to255 in 2010 was the first step on this journey. Today’s launch of the new design is the second step. The next step is 0to255 Studio, a complete color tool that builds on the intuitive design of 0to255. It will be an optional upgrade to the current free version which will remain free. Read about what you’ll be able to do with 0to255 Studio here.

Long-time users should find themselves right at home with the new design as mostly everything works the same as it did before. However, if you run into any issues, don’t hesitate to reach out. I am listening closely to feedback and have already made changes based on it, so if you don’t like something, let me know and I’ll do my best to fix it.

Over two million people have used 0to255 since the day it launched. Nothing makes me happier than thinking about all the amazing things you all must have made over the years with a little help from 0to255. I look forward to continuing to design tools that help you get your work done.